Bestshoeshub is audience-supported. When you buy through links on this site, we may earn an affiliate commission that we use for site maintenance. Learn more 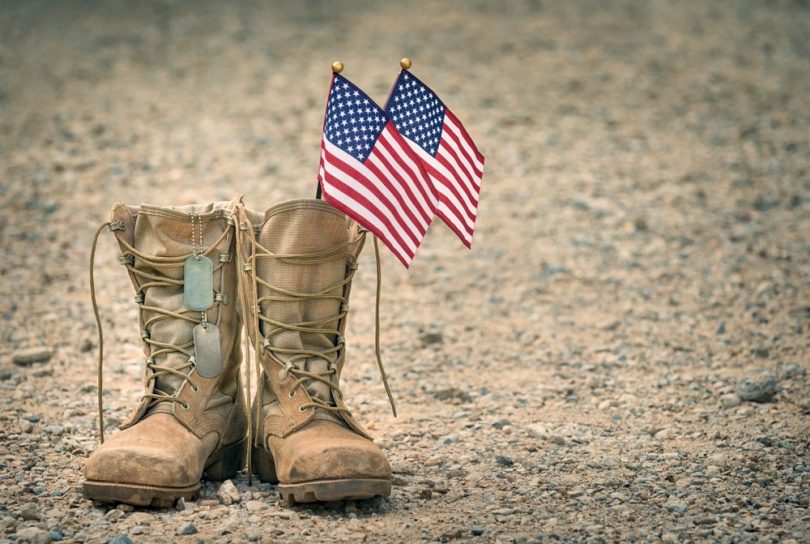 Combat boots are a must-have for every fashionista’s collection. They are sturdy but pleasant to wear and they go with a variety of outfits. Because of their rough and athletic vibes, they are extremely popular among girls and tomboys. However, many girls prefer a more feminine style with combat boots, which is certainly possible. Recently, these shoes have received a lot of attention, because even the most prominent designers have released them with some trendy tweaks, such as those shown below.

Combat boots no longer have the identical anti-establishment charm as they once had. Classical lace-ups in brown or black, as well as more daring hues like blue and green, are available in a range of modern designs. There are also heeled alternatives, platforms, and fashionable women’s boots that buckle to the top to the knees. The Chelsea-type combat boots with a laceless slip-on design are another option.

You won’t find a steel toe on most combat shoes on the market today since they weren’t built for fighting. They are, however, typically more practical than other designs. The outsoles are generally constructed of a strong rubber sole with designed tread below to give appropriate foot protection, durability, traction, and grip. Combat boots generally feature thick soles, varying from 1,5 to 2 inches in height, even though they’re not strictly heeled.

The uppers are generally composed of toughened leather. Even if you do not intend to go across tough terrain, the concept is that your feet would be protected in a tough environment, just like work boots or hiking boots. The material might be coated for moisture protection or made entirely waterproof in some models.

How to Style Combat Boots 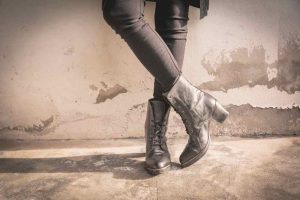 Pairing combat boots with pants is the most convenient method to wear them. For example, slender fits put inside the boot are a traditional style. You might even wear trousers over the boots, or choose trousers that sit right over the combat boots. Combat boots look fantastic with skinny jeans, straight leg, flares, cuffed jeans, and pretty much any other type of trousers.

As the weather warms up, your shorts should be back in style, so take your combat boots along and combine them with your favorite pair of shorts. For a summer outfit that will make you feel fresh, mix some extremely cute shorts, bright combat boots, vintage sunglasses, and a lovely purse.

You might want to try this outfit for a minimalist yet casual look, whether you’re going to work or an informal hangout. It’s a simple outfit consisting of black leggings, a cozy sweater, and combat boots. A linen scarf will bring a layer of femininity to this outfit. It’s one of several outfits that’s simple to put together yet still makes you look beautiful without drawing too much notice from others.

The combination of combat boots and a mini skirt looks outstanding without stockings. You still can wear stocks with them, after all. Rather than a more refreshing vibe, the outfit would have a more elegant feel. As an instance, you could wear a mini skirt with a jean jacket placed over it. The combat boots will be nicely paired with stockings, as you’ll see. You might imagine how a look without stockings would be more invigorating and youthful. However, wearing the stocks gives you a more sophisticated and feminine appearance.

It’s an all-black combination that, rather than appearing dark, appears elegant and sophisticated. You can wear an extremely large knit sweater as a top. Combine it with a black short leather skirt and combat boots to complete the look. When joined together, these elements appear to be perfectly matched. You should consider this simple and elegant outfit since it does not appear to be hard to put together.

This style is ideal for springtime meetings, nights in the gardens, and a bit feminine flourish if you include a flowery-themed dress to the outfit. Your combat boots will provide a comfortable and stylish edge, whereas the dress will make you feel youthful and beautiful. Choose a dress that falls somewhere above the knee so that you have adequate space between your combat boots and your skirt. If you are self-conscious about your legs, wearing tights may give confidence and also warmth to your outfit.

Combine a sophisticated leather jacket with animal-print leggings, an inky turtleneck, and a black combat boot for an adventurous, trendy, and seductive appearance. Remember that the charm is in the details. That is why you must pair this outfit with big cat-eye sunglasses, a handbag, a ponytail, and layered bracelets.

Combat boots fit perfectly with jeans. You can wear a sweater with an army jacket on top, for instance. Combine them with black combat boots and a piece of skinny jeans. To finish the look, put on a red or brown scarf. This outfit would be ideal for informal gatherings in the fall or winter.

Monochrome styles are extremely popular currently, and while you’re at it, follow the path less traveled. The outfit is completed by a leather skirt that lays nicely on your figure, a turtleneck T-shirt that flatters your shape, and lace stockings paired with combat boots. With curls or a high ponytail, you could go for a naked neck and no earrings or makeup appearance.

Combat boots are frequently perceived as having an androgynous appearance, with macho and rugged exteriors. You may extend this appearance to the upper part of your body by wearing a lightweight leather jacket as an additional layer when the evening starts to cool. If you want to seem stylish and sophisticated, you may throw the jacket across your shoulders.

Because combat boots make a powerful impact, it is critical to select a shirt that complements the outfit. You may combine a tucked-in striped shirt and jeans. This will result in a casual, nearly country girl look. Leave your hairstyle loose to make the outfit a bit feminine, but for a stylish look, go for a ponytail or a braided bun with sunglasses. A wristwatch will also look great with this outfit. This is a beautiful outdoor outfit that is both fashionable and rugged.

A pair of torn jeans, a black graphic shirt, and your beloved piece of combat boots may be a really basic, go-to outfit for you. Tucking the top of your shirt into your trousers, as well as tucking the wrists of said denim, are two simple ways to make this combination more unique. Because pants might not always fit within combat boots, it might be difficult to wear them with them. Cuffing them is a simple method to get around this problem.

1. Can you combine skinny jeans with combat boots?

Ans. Your legs will appear smaller, but you’ll have to find a balance on tops to avoid having big feet. This may be achieved by wearing a wide loose top, a thick sweater, or a loose tunic.

Ans. Yes, they’re stylish, comfy, and simple to style. If you haven’t yet purchased a pair of combat boots, you should do it immediately.

Benedikt Meyers is an accomplished executive with significant experience in global sales and marketing, product development, and supply chain for the apparel and footwear industries. He’s a skilled relationship builder who has lived in Asia for 10 years and visited the world to develop key alliances with industry partners in order to meet production and supply demands in ever-evolving markets.